This great opportunity allowed around 50 participants to discuss key aspects of the local and international strategies, tools and good practices for torrential floods prevention and management in mountain areas of southwest of Europe. A series of lectures were given by experts in the field. They provided knowledge and shared concrete experiences aiming to improve the characterization of torrential risks, to reduce the vulnerability of populations and strategic infrastructures, and to reduce the impact of these phenomena in mountain areas of the SUDOE region.

First, Jean Louis Valls, the director of the Working community of the Pyrenees (CTP) welcomed the audience and introduced the seminar by underlining the importance of cooperation as a key element to improve the natural risks prevention and management in the context of rapid global changes. He highlighted that extreme events, especially floods and storms, are causing heavy damages and losses every year around Europe, and that these phenomena are becoming more frequent and intense due to human-induced climate change. In fact, between 1980 and 2020, extreme weather and climate events accounted for about 80% of the total economic losses due to natural hazards in Europe.

The general introduction was followed by a very interesting and informative presentation regarding the general framework for flood risk management in Europe and Spain (flood directive 2007) provided by Juan Francisco Arrazol from the Spanish Ministry of Ecological Transition (MITECO). He underlined a gap in the management and prevention of floods in high mountain basins but stated numerous actions nonetheless dedicated to hydrological-forest restoration to reduce flood and erosion risks (with environmental co-benefits). Moreover, specific tools with various cartographies (DPH, flood zones) are available on the MITECO website, where areas of special interest, defined jointly with Civil Protection, are also identified. In this second cycle of application of the directive, an attempt has been made to include as a novelty, the effects of climate change on flood risk. Prevention efforts are focused on urban planning and land use regulations, on the basis of risk analysis and vulnerability analysis. 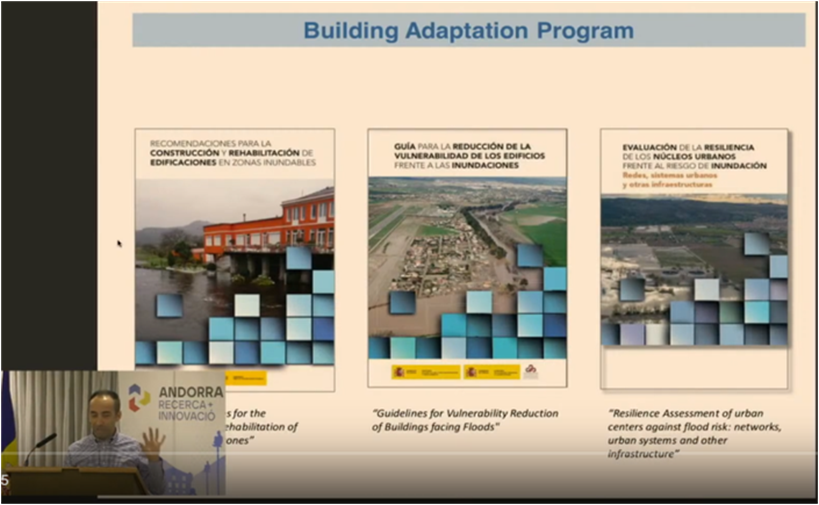 Carmen Llasat from Universitat de Barcelona introduced the main results of the POCTEFA PIRAGUA project that studied the floods events in the Pyrenees. Carmen first commented that between 1981 and 2015, there have been 181 flood episodes in the Pyrenees mountain range. As a consequence, there have been a minimum of 147 deaths and compensations amounted to 100 M €. Carmen then proceeded by explaining that the risks is determined by vulnerability, exposure and hazard. She highlighted the distribution of vulnerability across the Pyrenees influenced by the concentration of the highest population density in the Pyrenees mainly on the northern slope. In this study, Carmen underlined discordance between precipitations and floods occurrence, which lies in the fact that many of the extreme events (less than 24h) that produce torrential floods episodes are difficult to capture by the current recording stations. Carmen concluded by reporting a positive trend observed in the number of flood episodes at the scale of the entire Pyrenees and in almost all regions, but only statistically significant in Nouvelle-Aquitaine. Future scenarios point to an increase of heavy rainfalls and torrentiality, and the exposed value is increasing due to important population increase in spring, summer and autumn, when floods are more frequent. 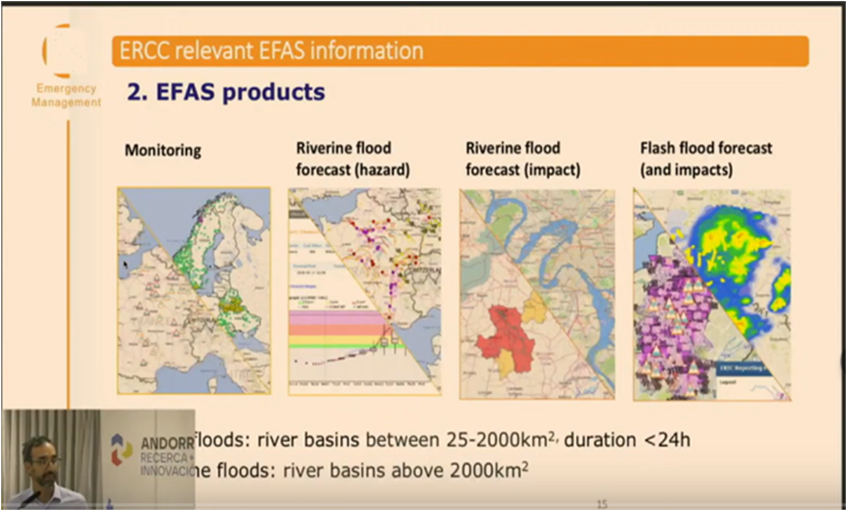 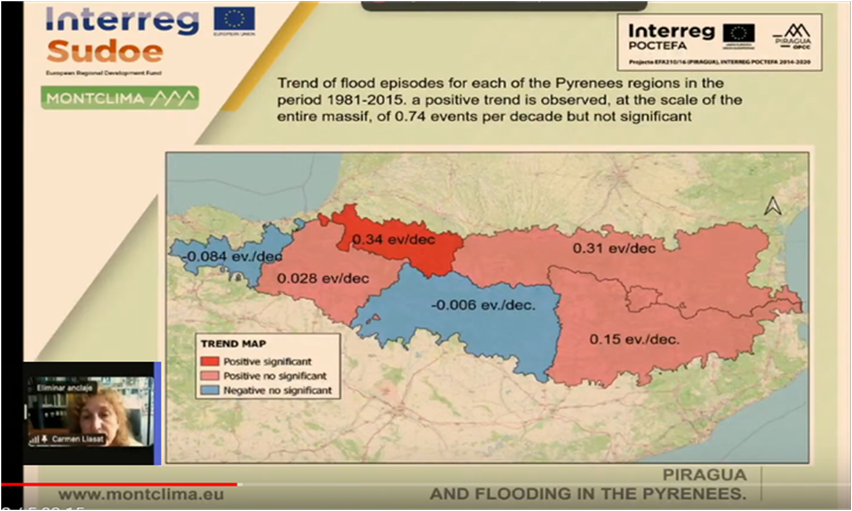 In this block, Yann Quefféléan from the Office National Forets- Restauration des Terrains en Montagne (ONF-RTM) presented a study analyzing the experience of the of storm ALEX impact in the Maritime Alps, with the objective of reducing the vulnerability. Yann commented that intense precipitations up to 600 mm (return periods of 1000 years and more than 100 in terms of flow rates) were recorded which affected in a heterogeneous way the various tributaries of the basins. Important impacts on the inhabited settlements near the watercourses were reported due to direct water erosion, deposition of materials, flooding and entrainment of floating materials. In this context, problems in accurately determining flow rates were noted related to the significant instrumental problems due to the virulence of the rains. The post LIDAR study made it possible to determine the volume of erosion and deposition caused by this event. Yann pointed out that in order to reduce vulnerability, it is essential to implement prevention tools through land-use planning and to create structures to control solid sediment transport in channels with high sediment loads. It is crucial to leave space for the channels. He also commented that for post-event channel restoration, it is important to maintain small and medium-sized vegetation rather than tall vegetation. ¨It is crucial to capitalize on lessons learned from the analysis of past catastrophic events to reduce vulnerability in future events. Pre and post DTM analysis through LIDAR technology (morphological changes) provide many clues, although the tools must be adapted to each case" Yann Queffelean concluded. 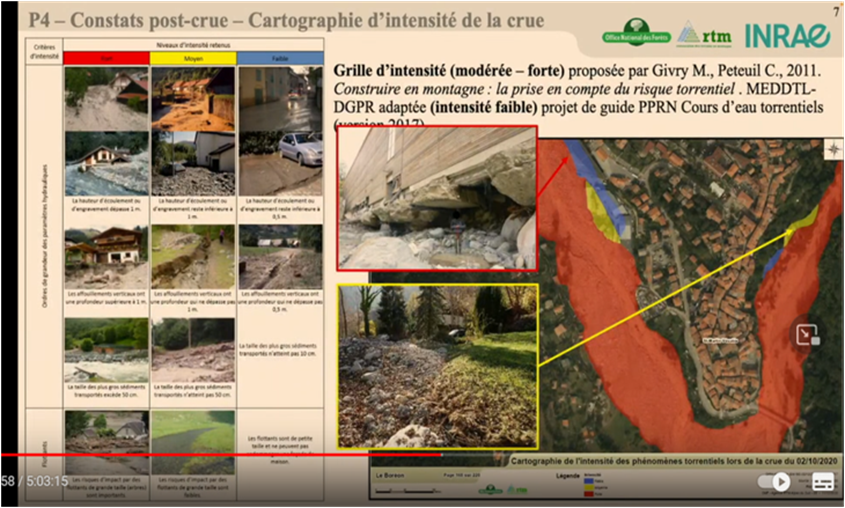 Following the case study in the Alps from the ONF-RTM, Xavier Llort from HYDS, presented the Anywhere H2020 project. The ANYWHERE approach is ¨based on multi-hazard impact forecasting that respresents a disruptive innovation in the field of climatic emergencies operational management¨ Xavier said. The objective of the project was to develop tools for the prevention and management of meteo-climatic risks. Xavier explained that it was necessary to integrate and cross-chain meteo prevention tools (radar models), risk prevention, impact models (including social networks), in order to develop decisional tools for prevention and self-protection plans that were tested in several pilot cases like in the A4CENEM (National Control Centre for Emergency Management).

In the second part, Rafael Sánchez-Diezma also from HYDS introduced the commercial services of ARGOS within the Anywhere H2020 project. He reported that one of the challenges of this project has been to generate market tools for risk prevention with a real application allowing anticipating the problem. He added that the most complex element was again climate change and its influence on extreme risk-bearing events. In fact, there is a real need for local scales to have such tools to support self-protection plans. Therefore, the ARGOS platform has been developed in this direction, feeding from groups and institutions to combine all the key tools and data for prevention and management. The platform is intuitive to use, in order to facilitate the activation of the emergency management chain. 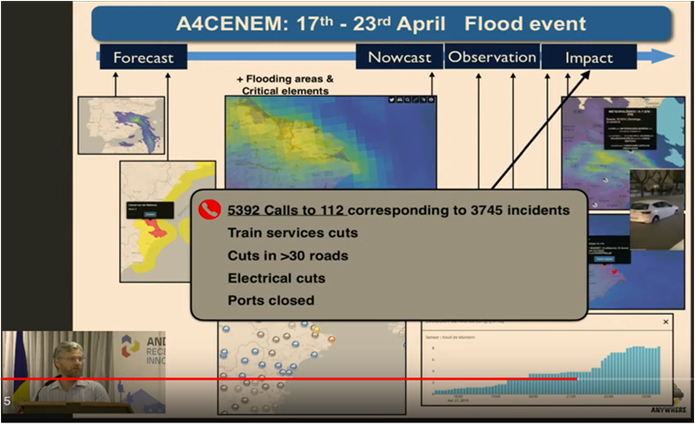 The third and last part of the seminar was dedicated to the reduction of the phenomenon impact.

Simon Carladous from the Office National Forets- Restauration des Terrains en Montagne (ONF-RTM) presented the service of the French State STePRiM (territorial strategy of the management of risks in mountain) for the multi-risk diagnosis in mountain areas. STePRiM is based on a territorial approach and uses a structured methodology from diagnosis to action decisions. Simon insisted on the urgent need to implement a specific approach to risk management in mountain areas which he illustrated by an example of the Luchon valley case. He pointed out that these risks in mountain areas are related to multiple natural phenomena that can cause often overlapping and interlinked hazards and to our limited knowledge and imperfect quantification of phenomena. Simon continued his presentation by explaining the specificities of mountain areas In terms of socio-economic assets are to be taken into account. For example, the disruption of transport routes and infrastructure in mountain areas due to phenomenon, have critical consequences like reduced access and indirect impacts.  Simon concluded by announcing that 2 national documents are developed to assist the state and municipalities in order to implement the STePRIM approach. 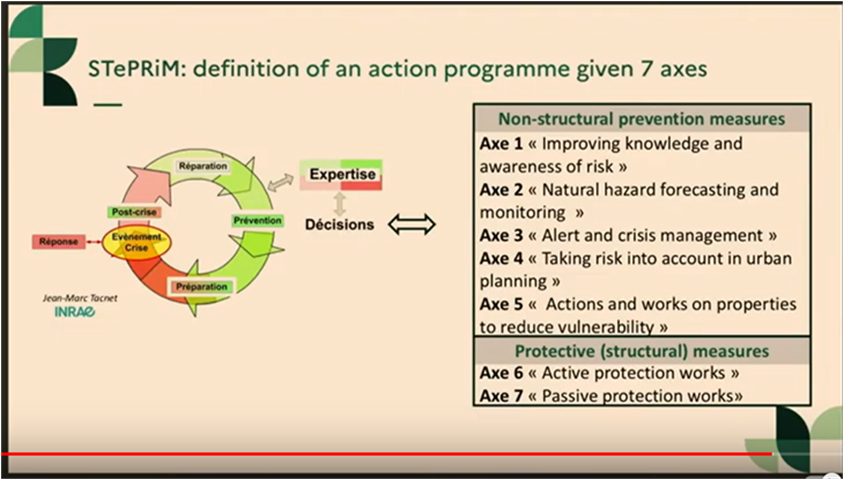 The last presentation of this seminar was held by Jordi Deu from SILVAGRINA. Jordi exposed a pilot case of MONTCLIMA aiming to mitigate the effects of torrential lavas upstream of a drinking water plant in Andorra (Claror torrent). In this context, nature-based measures have been implemented by means of degradable dykes in the main gullies generated by water erosion. In addition, revegetation has also been carried out by sowing Festuca eskiaa species through natural fertilization of the affected area previously prepared with the passage of livestock (a process called "ovinoremediation", according to the engineer). This combination of nature- based measures has proved effective in reducing the risk of erosion in this protected mountain area.

Finally, the Minister of Education and Higher Education, and president of Andorra Research and Innovation, Ester Vilarrubla, concluded the first day of the seminar, by highlighting the impact of hydrogeological risks such as falling blocks and landslides, floods and avalanches. The minister thanked the organization of the event and pointed out the importance of continuing to invest in transnational and inter-Pyrenean collaborations. ¨Beyond the borders; the mountains, their opportunities and their challenges unite us as neighboring territories, and this common approach is the best mean to turn the difficulties and challenges of living in the mountains into development opportunities for our territories", she concluded.

The seminar concluded Thursday september 22nd with a field trip to the Bartra bridge and the presentation of the action plan for river flooding by Andorran Civil Protection technicians. Attendees visited the Encampada valleys, and the trip ended in Canillo, to see the rock filter in the Montaup River. 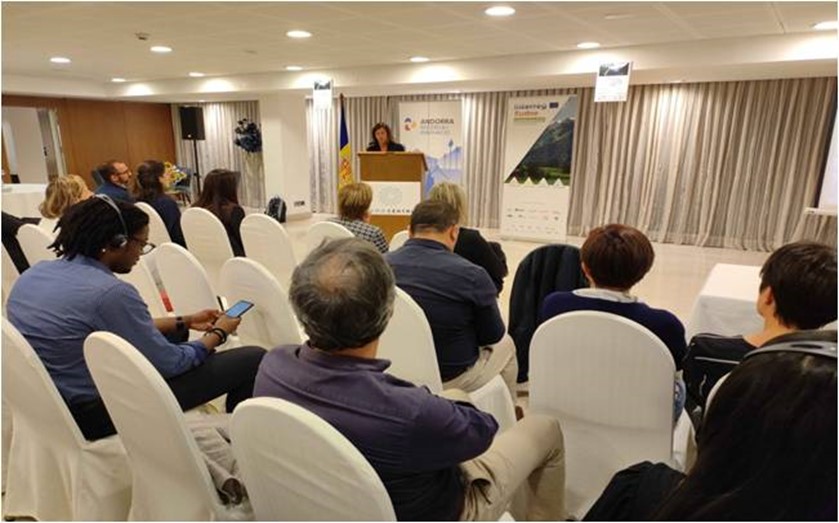 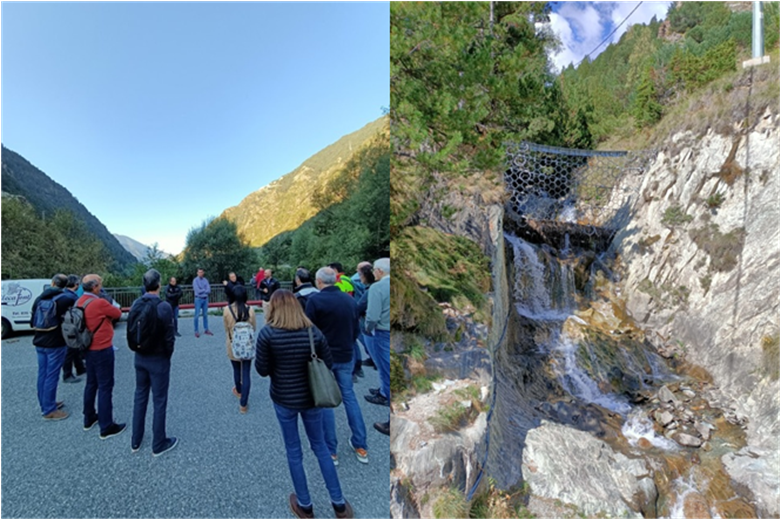